It’s a number’s game out here in internetland. How many followers do you have? How many views has your video received? How many shares and tweets has your blog post gotten this week? If your numbers are low, forget about it – you’re a nobody in the internet world. So how do you go from “Internet Nobody” to “Heavy Weight Viral Influencer” in a day?
Unscribble it! Look for the deeper desire and ask yourself, “Why do you want to be a heavy weight internet influencer?”

Most bloggers I talk to are looking for a way to express themselves and influence the world in a positive way. By the very act of writing your blog you are fulfilling your desire to express yourself. But what about influencing the world?

If you are an internet nobody and are looking to help transform the world on the internet, well… “good luck!” (As an internet nobody I feel I can say that.) Let me clarify here, I’m not saying to not blog. Definitely do! If you are struggling blogger, your reach on the internet may be small, but go for it anyway, as you never know who you might touch. And eventually the amount of people you touch will grow.

BUT, and here is the big but of it all:

Or could you have a positive impact on the world in other ways? Being the next Chris Brogan or Liz Strauss of the world is ONE way to influence the world (seriously, they are awesome), but there are other ways you can impact the world too. (P.S. There always are.)

Unfortunately in the real world, we don’t always get the instant gratification and validation of the numbers. We don’t get to see “the numbers” of the effect we have had. 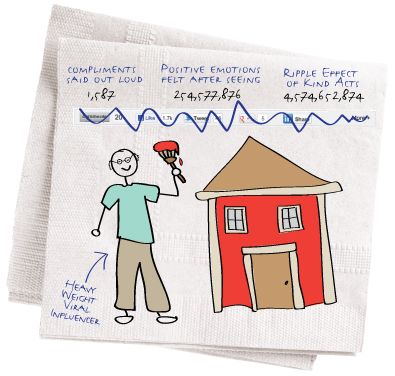 Think about it. What if every act we did came with a status bar similar to our blog posts? We say, “hi,” to our neighbor and ask them how they are and we get five likes and a share. We pick up some trash and get 10 shares, 50 tweets and five comments. I wonder how it would change the world and our interactions if we could see the numbers and get the ROI on our acts of kindness. Would the nice lady down the street get a book deal because she has a ton of fans and everyone she waves and smiles at just loves her and “likes” her over and over again?

Every small act of listening, smiling, supporting, hugging, validating, or whatever will have a ripple effect around you. So even if you aren’t an internet influencer, you are always a real world influencer. It’s not something we will ever be able to accurately measure, or get a true ROI on, but it could actually “virally” change the world with your actions. You could influence the world with your actions, and guess what you already do!

So now you know you are indeed an influencer whether you like it or not, but you still want to be a “Viral Heavy Weight Influencer.” Totally possible! Just take a look around you and take action. But let me warn you, unfortunately you won’t get any numbers to prove it. BUT if your real desire is to change the world in a positive way, you still can.

Take a look at Jim Cotter. Jim is a “Viral Heavy Weight Influencer” in every sense, but he doesn’t have the numbers to prove it either. He’s a man who is literally painting his town. He is volunteering his time and resources to fix up his town. (See the video here: Heavy Weight Viral Influencer.) But the sad part is that we don’t get to see his numbers. He doesn’t get to measure the full impact of his acts of kindness. So if you ask anyone in internetland who Jim Cotter is, he’s a nobody. Ask anyone in the real world… and they probably won’t know him either. But it doesn’t matter. He’s not acting in a manner to boost his numbers, yet, he is having a huge viral effect on the world. He’s a real world heavyweight influencer.

If your true desire is to be a “Viral Heavy Weight Influencer” and you are still building your internet following, take a look around your community – my guess is you will find a park that could use some cleaning up, a Boys and Girls club that could use volunteers, or an elderly neighbor’s gutter that need some cleaning. Can you imagine the viral impact you could have in the world by getting involved in the real world? You won’t see the “numbers” that your act has on the world, but you will be influencing the world in a positive way. In a way that just might go viral; people can’t help themselves but want to act nicer when they see others doing nice things. Your big kind acts will go viral, baby!

So, for all the small time bloggers looking to influence the world, remember, you already are influencers with your small acts in the real world. If you are desiring to be a “Viral Heavy Weight Influencer” just look around your REAL world environment, and you will find opportunities.

If Jim Cotter can be a “Viral Heavy Weight Influencer,” so can you! Just look around!

Unscribbling: the art of problem solving and fulfilling your desires is now available!