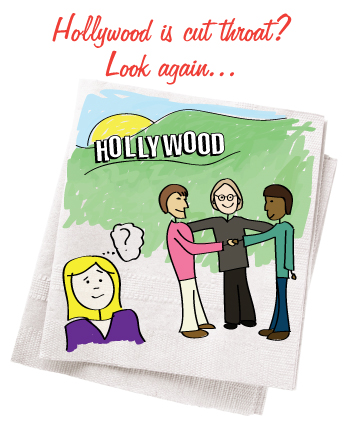 LA is notoriously construed as a cut throat environment where if you’re not “somebody” you are “nobody” – an environment where everyone is out for themselves, people ride shirt tales and abandon friendships at the first sign of a leak in the public image boat.

A couple of years ago I was in the Hollywood Hills attending a book launch party (yes, life can be strange and land you in some fascinating places sometimes). This is not at all normally where I spend my time, so I was a little nervous and did not know what to expect, especially since the mentality listed above was all I’d ever heard. Couple that with the fact that one of my friends had warned me not to use my “mid-west ways” and go up and talk to just anyone. He said you had to be invited into conversations by someone “in the know” so… keep your nose down unless someone talks to you.

(Though initially I could not help myself. There was this girl standing by herself and I felt bad so I went up and talked to her… turns out she was one of the wait staff… yep, I’m THAT cool… anyway, moving right along.)

As I sat at a table with some of the other non-LAers, a man (we’ll call him, Ken, because that’s his name) sat down at the table with us. Ken is definitely an LA somebody that I could not believe sat down with us, but he was so friendly and fun to talk with that I began to wonder if LA was as bad as they say. Soon, Ed (Ed of the movie star type) and Larry joined the table too. (Larry of the mover and shaker type.) Ken knew them both and introduced Ed to Larry. As the three men began to talk, Larry immediately jumped in and said to Ed, “I know someone who might be able to help you with your project. Let me get him in touch with you…” Ed thought that would be great, so Larry whipped out his phone and got Ed on the line with his friend.

Ken smiled and looked at us non-LAers at the table and said, “This is how it works here. Everyone helps everyone else. Right now Larry is helping Ed, expecting nothing in return. Later, maybe Ed will be able to help Larry. Who knows? But it is all about the ‘How can I help you?’ mentality here.”

What a different way to think about Hollywood!

So with LA you have two ways you can think about it:

1. Everyone is out for themselves

2. Everyone is seeing how they can help one another – to boost everyone up.

Whatever the truth may be is actually irrelevant. It is the initial thought that you approach the scene with that will alter your interactions in it.  (Or any other environment for that matter.) For..

As you think –  ‘Everyone is looking for ways to help one another.’
You act – Looking for ways you too can help those around you.
So the way you see the world – Open, friendly and inviting
Runs your life – Imagine how people will want to help YOU if you are so generous in helping THEM.

As Larry listened, contemplating, “How can I help?” he thought of a way. His helpful nature has helped make him become one of the most connected and influential people in LA. Not only did his example influence his immediate contact with Ed, it also lead by example as a great introduction to how Hollywood really works.

Eventually I let Larry’s example, Ken’s words, my mid-west upbringing (and probably that glass of Chardonnay) get the best of me and I started talking to strangers at the party. And I found a way to help someone there (Who knew? Yep, little old me was able to help someone there!) and I made a new friend. Can you imagine how many more people and opportunities I could have encountered, had I started the night with that mentality?

So as you approach any situation with trepidation, reshape your thoughts and change your attitude towards the positive. For, “As you think, you act – so the way you see the world runs your life.”

What can you re-think or what attitude can you change to propel your life in a more positive direction?

Looking for more thoughts on changing your attitude? Check out the “Changing your Attitude” Chapter in Unscribbling: the art of problem solving and fulfilling your desires.

Unscribbling: the art of problem solving and fulfilling your desires is now available!